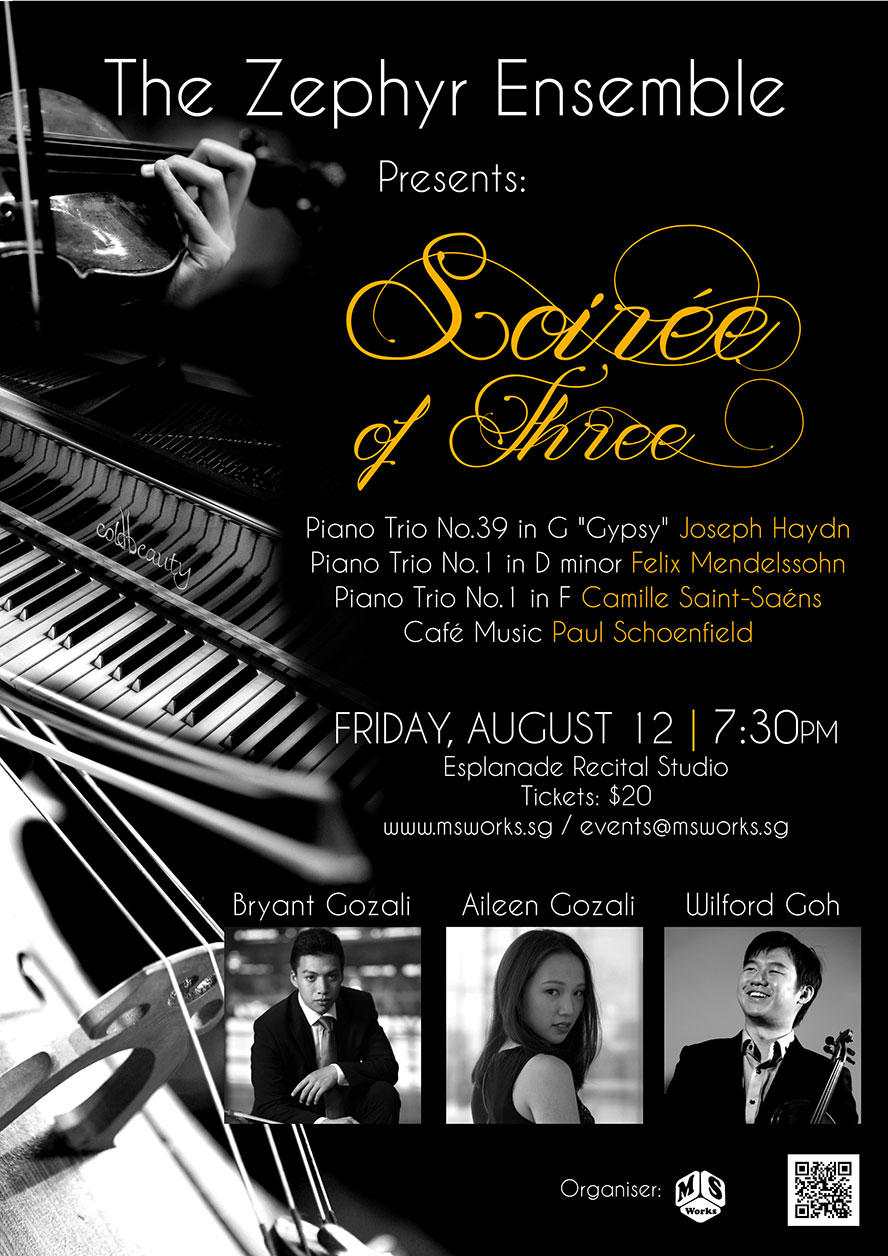 Soirée of Three will be highlighting music from the Piano Trio repertory, a genre that is often overshadowed by others such as the symphonies and string quartets. The listeners will be taken on a journey from the classical era through to the 20th century, from Austria to America, as The Zephyr Ensemble brings in music from the West, unveiling the most beloved and celebrated piano trios from four master composers of different periods and nationalities. From Haydn’s light-hearted melody with a twist of Gypsy music, to Mendelssohn’s heart-wrenching themes and devilish virtuosity; from Saint-Saëns‘s naïve spirit and brilliance in writing , to Schoenfield’s humorous yet serious music combining jazz and classical traditions, the soiree promises to be a night of emotional connections and sublime discovery, bringing you an exuberant and enlightening experience.

Praised for her “poetic and electric, warm and seductive” playing, Indonesian Chinese-American pianist Aileen Gozali has dazzled audiences world-wide, including China, Germany, Hungary, Indonesia, Italy, Japan, Korea, Malaysia, Singapore, Thailand, and the United States. She made her concerto debut at the age of 10 and had since then appeared as a soloist with the Jakarta Simfonia Orchestra, the Cleveland Music Institute Orchestra, the Xiamen Music Academy Orchestra, The Napolinova Youth Orchestra, the University of Alcante Orchestra and the Yayasan Musik Jakarta Orchestra. (Full Bio)

Bryant Gozali, 22, is the student of the Grammy Award Winning Cellist, Antonio Lysy, at the Herb Alpert School of Music of UCLA. He recently graduated from the Cleveland Institute of Music under the tutelage of the former Principal Cellist of the Cleveland Orchestra, Stephen Geber. Bryant started playing the cello at the age of 9 with the Director of the Xiamen University Arts Department, Professor Su Li in China. His past accomplishments included receiving second prize in the Ai Qin Bei National Cello Competition in China in 2004 and 2006. (Full Bio)

Singaporean violinist Wilford Goh began his musical studies when he was three, andby the age of seven was enrolled as a student in both the piano and violin faculties atthe Nanyang Academy of Fine Arts, School of Young Talents (NAFA-SYT)department. Whilst there, he started violin lessons with Zhang Ying before studyingwith Chin Chee Mee for over a decade. After being invited to perform at the 2009ABRSM Awards Ceremony for outstanding achievement, he went on to win thirdprize in the National Piano and Violin Competition, Violin Senior Category in 2011. (Full Bio)