For those who have purchased tickets online, please note you may collect your tickets at the Esplanade Recital Enterence.  There will be a table set up from 6:30pm. 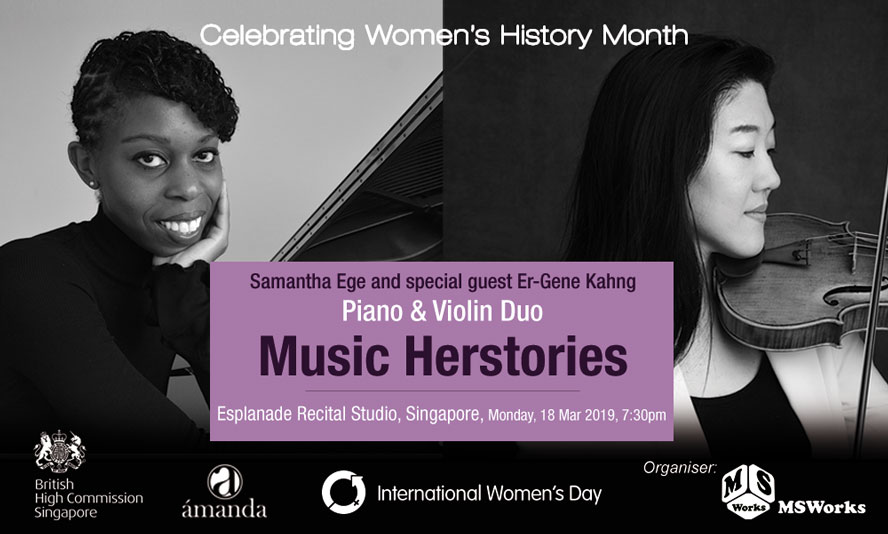 Music Herstories presents an evening of music by women composers, women who challenged and defied the mis-conceptions of what it meant to be a composer. Samantha Ege and special guest Er-Gene Kahng perform the musical herstories of six women who wrote music even when wider society would not listen. Music Herstories places Florence Price, Margaret Bonds, Vítězslava Kaprálová, Irene Britton Smith, Ethel Smyth and Ethel Bilsland in the much-deserved spotlight. Prepare to be enthralled by some of the most remarkable music you’ve never heard.

International Women's Day ​​(March 8) is a global day celebrating the social, economic, cultural and political achievements of women. The day also marks a call to action for accelerating gender parity.​ ​International Women's Day​ (IWD) has occurred for well over a century, with the first IWD run by the Suffragettes in 1911.​ IWD belongs to all groups collectively everywhere. IWD is not country, group or organisation specific.

In 2018, more than ever, there was a strong call-to-action to press forward and progress gender parity. The global call to #PressforProgress motivated and united friends, colleagues and whole communities to think, act and be gender inclusive. #PressforProgress, as an International Women's Day campaign theme, extended well beyond one day to support and unify year-long activity aimed at forging women's equality.

Samantha Ege teaches Music in Singapore and has been teaching internationally for a number of years. She studied Music at the University of Bristol and McGill University. She is now conducting her PhD in Music at the University of York where her research centres on African-American composer, Florence Price. As a concert pianist, her focus on women composers has led to solo performances at the Arts House (supported by the British High Commission and International Women's Day), the Chicago Symphony Center, the University of York, Monash University and the Women Composers Festival of Hartford. This year, she looks forward to joining violinist Er-Gene Kahng for performances across Southeast Asia and the U.S.

Ege released her debut album in May 2018 with Wave Theory Records, entitled Four Women: Music for solo piano by Florence Price, Vítězslava Kaprálová, Ethel Bilsland and Margaret Bonds. The album has been described as "an impressive collection...performed with virtuosic assurance." She has also been commended "for her goal to bring the music of these composers to greater public awareness."

Kahng has been involved in reviving the works of  African-American composer, Florence Price. Her recent recording of Price's two violin concerti has been released through Albany Records, and has been cited by The New Yorker, the New York Times, and NPR. Her wider performances have been described as “sporting a sweet warm tone” and “a caressing sense of phrase,” “translat[ing] the music into a meaningful musical discourse that few virtuosi accomplish;” her “beautiful tone” and “honest musicianship” have marked her performances with a “fresh communicative air.”

Email us at This email address is being protected from spambots. You need JavaScript enabled to view it. for more information

or to register your interest!