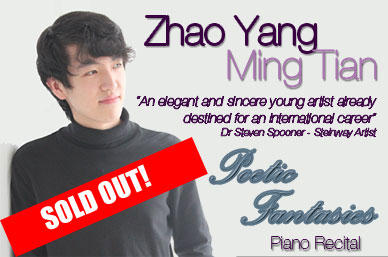 17-year-old prodigy Zhao Yang Ming Tian was born in Hainan, China, and started learning the piano at the age of four. At 13, he entered the Beijing Central Conservatory of Music, where he studied with renowned pianists Chen Bigang and Ling Yuan. A recipient of the Lee Foundation Talent Scholarship, Ming Tian has since completed two years of study in Piano Performance at the Nanyang Academy of Fine Arts, Singapore, and is at present a student of Mr Benjamin Loh.

Since taking part in the Hong Kong Mozart Competition in 2003, where he was the Second Prizewinner, this teen sensation has won multiple awards in international competitions. He received Gold awards at the China Central Television’s Youth Piano Competition in 2004, as well as the "Kadenza" Youth Competition in China in 2007, where he also claimed the First prize. Last year, at the inaugural International Chopin Piano Competition (Singapore), Ming Tian charmed a local audience and an international jury to sweep both the Audience Prize as well as the Second Prize (Category E). A local reviewer praised the ‘vast palette of sound and emotions’ displayed in his ‘awe-inspiring’ performance.

In 2010, he was handpicked by Steinway Artist Adam Gyorgy for a brief stint at his piano academy; he received a scholarship to the Adam Gyorgy Castle Academy in Hungary, where he performed as a soloist. In January this year, he returned to Hainan for a rapturous homecoming and a solo recital.

In Singapore, where he has been based for the past two years, he has given numerous performances, at the Lee Foundation Theatre in NAFA and elsewhere, both as a soloist and a chamber musician. This will be his second performance in the Esplanade Recital Studio.

This summer, Mingtian will be heading to the United States, where he will continue to pursue his musical studies. He has received several offers of scholarships from the New England Conservatory, Oberlin Conservatory and the University of Kansas, and is grateful for the generosity of the offers.

For more information, visit www.msworks.sg or email: This email address is being protected from spambots. You need JavaScript enabled to view it.